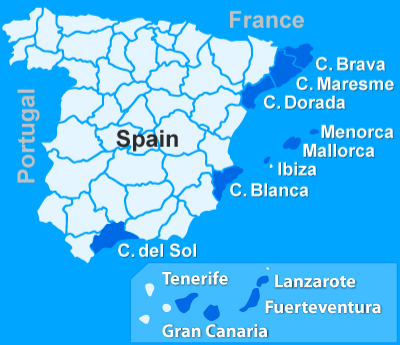 Denia: a picturesque and happening city on the Costa Blanca

Denia, the capital of the Marina Alta region, is one of the most beautiful towns on the Costa Blanca. The town itself is named after the Goddess Diana. Denia is an old, picturesque Mediterranean fisher’s town which developed during the 12th century around a castle called “el Castillo de Denia”, located on a hill. This architectural beauty is nowadays the town’s archaeological museum and offers beautiful sights on the surroundings. There are plenty of beautiful historical buildings in Denia’s city centre and the attractive main street is a pedestrian zone.

Its shaded plane trees, its variety of pubs and large chain stores will remind you of bigger cities like Valencia or Alicante. And, because there’s always a party or something to celebrate, Denia is also called the fiestas town. Besides being a touristic magnet, its powerful industry also makes it a very active city. In other words, the whole year is a good period to go on a holiday in this happening city, even during the winter.

Find your villa in beautiful Denia

In Denia: information about the Montgó mountain and Denia’s national reserve

The Elephant's part of a wonderful nature reserve at Denia's hinterland

with its unique fauna and flora

Denia is located on the foot of an imposing mountain of which the local residents are very proud of, the Montgó. The Montgó, which is also called “the Elephant”, is 753 metres high and endowed with a unique fauna and flora. This wonderful nature reserve at Denia’s hinterland shelters more than 600 types of plants, hawks, kestrel and peregrine falcons, badgers, foxes, weasels, turtles and reptiles. Because of the area’s peculiar microclimate, you’ll even see many types of flowers, depending on the season. A few years ago, the Montgó became a national reserve and the uncontrolled construction of villas on the foot of the mountain finally stopped. If you’re a nature lover and you’re planning to visit it, there’s more information about its walking routeson-site.

Denia: chill out on the beach or enjoy a sportive holiday on the Costa Blanca

The northern part of Denia, las Marinas, is composed by 20 kilometres of long white sand beaches. The southern part is a 4 kilometre long rocky coast, las Rotas, which is the extension of the Cabo San Antonio and the Montgó nature reserve. The marine fauna and flora are very well protected there, because it has the status of marine nature reserve. Water sport lovers won’t get bored in Denia: surfing, sailing, water skiing, diving, jet skiing or fishing are just some of the activities available. And while trekking lovers enjoy a walk in the mountains with amazing views, sport loverscan enjoy a game of tennis, golf or go horse riding.

Denia and its mild climate, a wonderful place for you health

Daily temperatures in Denia rarely go below the 16 degrees in the shadow, not even during the winter. The sun shines throughout the year, so you never get winter blues. Even the WHO and some European doctors recommend Denia to people with health problems, because of its mild and beneficial climate. Denia’s climate is known to have pleasantly warm summers, and not very cold winters as being a sequence of high pressure areas. In other words, it’s the perfect climate for people who suffer from asthma, rheumatism, arthritis or heart diseases. Denia and Marina Alta are therefore very famous among winter visitors. In Denia’s harbour, there’s even a WHO-monument reminding people the healthiness of its climate.

Denia has a cosmopolitan harbour and a big marina. Many of the ferries sailing to Ibiza and Formentera depart from here. Denia offers excellent and modern facilities, such as a hospital, a few spas and two golf courses with 18 holes in la Sella and Oliva Nova. Denia has a vibrant nightlife. You won’t find that many clubs, but there’s plenty of pubs, live gigs and restaurants. The best places are located in the “las Brisas” neighbourhood and in les Fonts. Although you’ll find many more on the boulevard, where there’s always a good atmosphere.

Denia’s market is held every Monday. Some of the products you’ll find there are: fresh fruit and vegetables, local and artisan products, and many other gadgets. With more than 250 restaurants, Denia will certainly satisfy everyone’s tastes. The best-known restaurant neighbourhood is las Rotas. Around Denia’s Castle, and near the city centre, you’ll find many different museums, from Modernistic art to ancient archeology, and a bit of everything. Did Denia steal yor heart? Hurry up and check the availability of Search and find your villa in Denia 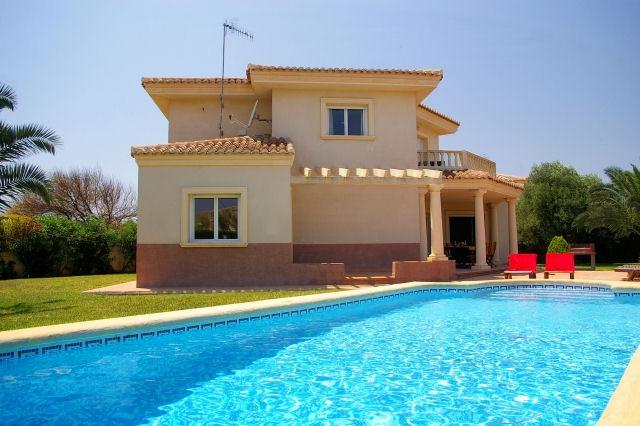 Exceptional villa in Denia with 4 bedrooms with capacity for 8 persons.
Show this villa 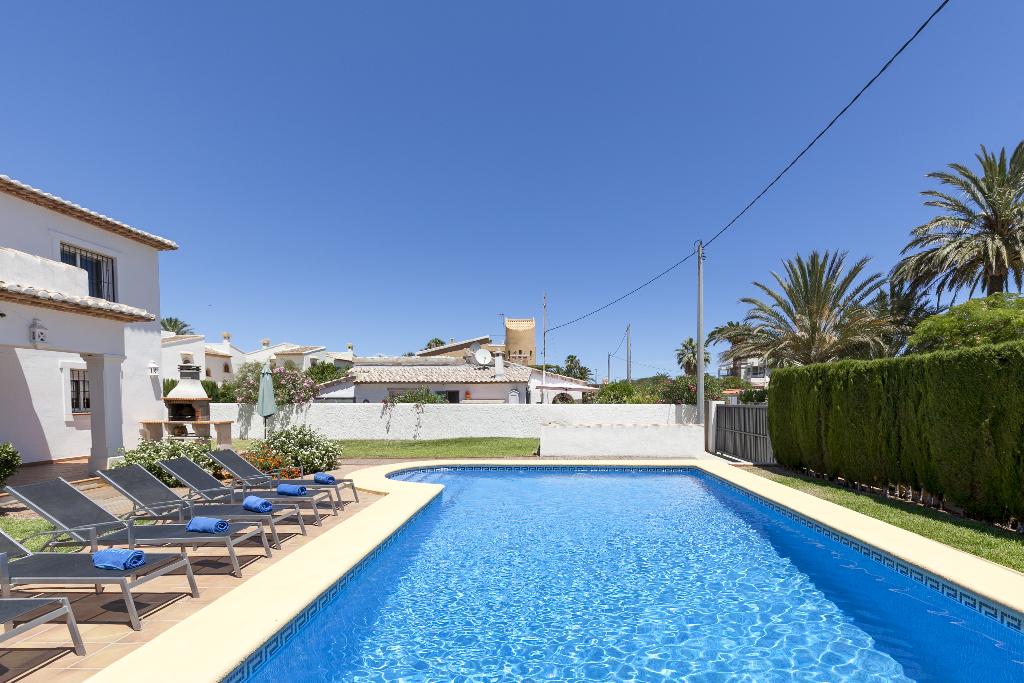 Holiday Villa with private pool in Denia, on the Costa Blanca, Spain for 8 persons.
Show this villa 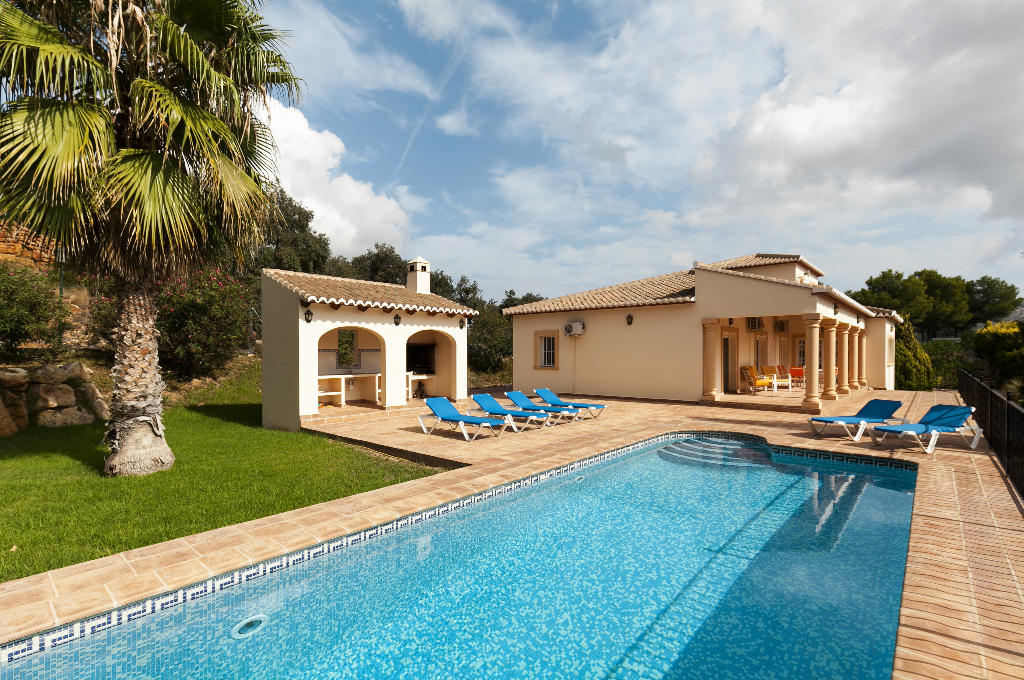 Beautiful and comfortable villa in Denia, on the Costa Blanca, Spain with private pool for 6 persons.
Show this villa