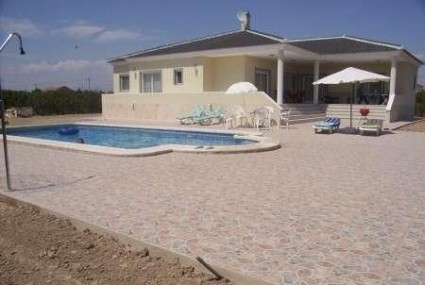 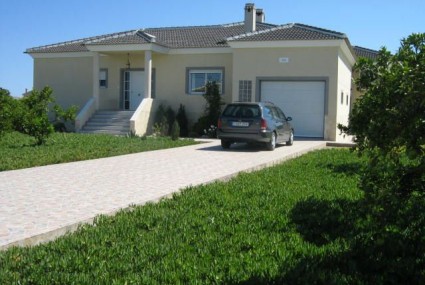 Peace, space and privacy in Daya Vieja (Costa Blanca South) with this beautiful villa on a plot of 1ha

Your villa near Daya Vieja

This very spacious villa stands on a plot of 10.000m2 between the orange trees and has a private swimming pool 12x5,5m and large indoor and outdoor terraces. The whole plot is fenced, large gates at the front gives access to the plot. In the nearby Guardamar del Segura are the golden sands which is just 10 minutes away from the villa. Distance to Alicante or Elche is only half an hour. This is an excellent location for those who seeking peace, space, freedom and privacy and can search for the crowds if they want. In the same street, the Spanish soccer star Raul of Real Madrid had his "Villa Vera" The villa is situated about 500m from the village of Daya Vieja The villa has large terraces (+ /-400m2) and a large private pool. The whole plot is fenced with a large roll-up doors at the front of the house. In short, plenty of privacy. From the upper terrace you see the orange trees. At night you see the lights of the houses in the places Benijófar, Rojales and San Fulgencio.

Mandatory fees to be paid on arrival:
Cleaning: 150 euro
Bed linen and towels: 20 euros per two people
0.25 per kWh retained after the rental period of the deposit

At the opposite the house lives a Spanish farmer who cultivated artichokes and broccoli. A few kilometers from the villa in the town of Rojales you will find an 18 hole golf course 10 minutes drive from the house the golf course of La Finca. The village of Daya Vieja has lots of Spanish charm, there is a small bakery shop kiosk and some nice Spanish cafes, a village square and a church. The nearby places Rojales, Almoradi and Guardamar del Segura have all the amenities. The house is centrally located and easily accessible. Beaches and climate: The Costa Blanca has many good beaches. They are generally broad, long and covered with fine golden sand. The most popular beaches on the Costa Blanca are around Alicante, Guardamar, Santa Pola, Torre la Mata, La Marina, Torrevieja and Benidorm. The Costa Blanca has its name from the miles of white beaches and those beaches are on average 50 meters wide This is what many sunbathers and fun seekers attracts. Most beaches are easily reached by car up near the beach. The sand run gradually into the sea and are therefore very suitable for children. The beaches are guarded by lifeguards during high season. The beaches also have play equipment. Remember that the popular, large beaches can be very busy in high season. Fortunately, are the beaches long and wide enough for everyone to find a place. The sun shines almost always the azure Mediterranean and invites the whole year for a dip. The Costa Blanca is one of the sunniest areas in Europe with 300 days per year Sun The average temperature in winter is around 16ºC. In the spring and autumn, the average temperature is around 22ºC and in summer the average temperature around 33ºC. The low humidity and a cooling breeze from the sea off the south west, despite the temperature still feels comfortable. The inlands of Spain are a lot warmer in the absence of a cooling breeze from the sea. July and August are the warmest. Overwintering, entertainment and excursions: The Costa Blanca is very popular in winter. The most famous resorts for the winter on the Costa Blanca, Benidorm and Torrevieja. In summer, the city's are alive 24 hours a day. In the winter months it is quieter but there is still plenty to do. The Costa Blanca is also suitable for real lovers of culture but only those who are willing to rent a car and go inland. Moreover, in the hinterland are amusement parks and water parks to find where the children can have fun. A jeep safari through the hinterland, an organized tour through the palm forest of Elche or visit one of the spectacular nightclubs in Elche is worth. You can also visit the Priests Garden in Elche with a variety of plants, shrubs, cacti and the famous eight stammige Imperial Palm. You can visit the 17th century St. Mary's Church, located in the old town, where every year the Passion Play: "The Mystery of Elche" is performed. The beautiful historic Santa Barbara Castle in Alicante, which is originally an Arab fortress was, is definitely worth visiting. The castle is on the Benacantilheuvel which offers wonderful views over the city. On the Costa Blanca you will find many restaurants. Ranging from business to tourism rather typical Spanish restaurants and tapas bars. In the tourist centers, the fast food level is quite high and you will find Italian, Dutch and Chinese restaurants.