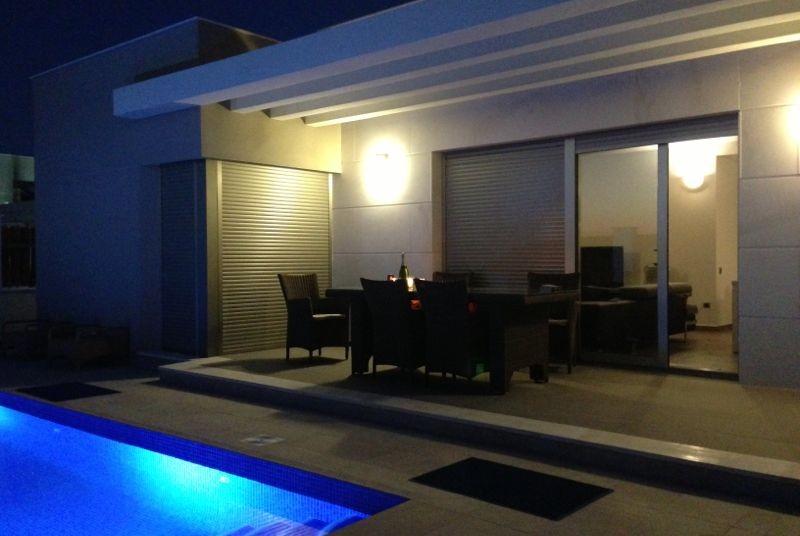 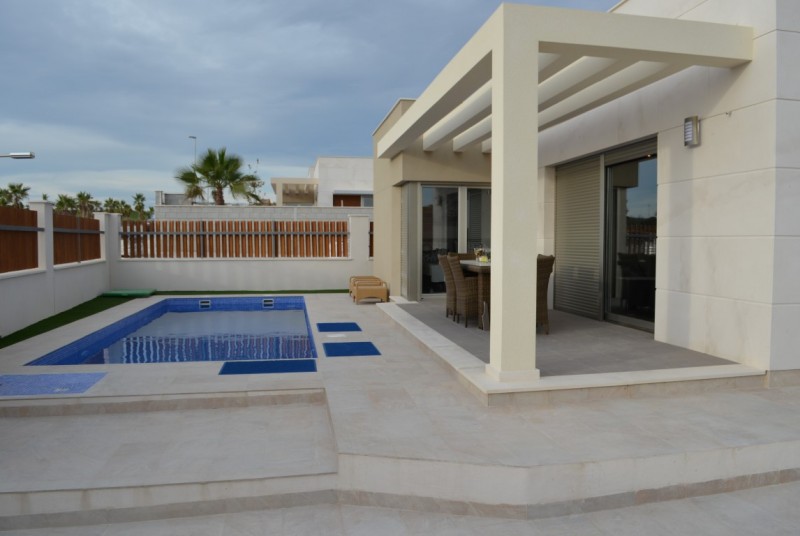 Your villa near by Orhiuela

This new modern home is on the golf course Bella Vista Golf and between Orhiuela and Algorfa. The new modern villa is located within walking distance of the driving range and golf course. The house is detached and has a large plot with private pool, the terrace is partly paved and partly equipped with artificial grass. In the house has three bedrooms and two bathrooms, one bathroom has a Shower and second bathroom has a shower. The living room is modern and nicely furnished and is fully equipped and offers seating for 6 people, here you have satellite TV and wireless internet connection. The entire house has air conditioning with heating. The kitchen is modern and has a dishwasher, refrigerator and oven, in a separate section you will find the washing machine.

Mandatory fees to be paid on arrival:Cleaning: 95 euroBed linen and towels: 20 euros per two people Electricity: 0.25 per kWh retained after the rental period of the deposit

Beaches and climate:The Costa Blanca has many good beaches. They are generally broad, long and covered with fine golden sand. The most popular beaches on the Costa Blanca are around Alicante, Guardamar, Santa Pola Torre la Mata, La Marina, Torrevieja and Benidorm. The Costa Blanca has its name from the miles of white beaches and those beaches are on average 50 meters wide. This is what many sunbathers and fun seekers attracts. Most beaches are easily reached by car up near the beach. The sand run gradually into the sea and are therefore very suitable for children. The beaches are guarded by lifeguards during high season. The beaches also have play equipment. Remember that the popular, large beaches can be very busy in high season. Fortunately, are the beaches long and wide enough for everyone to find a place. The sun shines almost always the azure Mediterranean and invites the whole year for a dip. The Costa Blanca is one of the sunniest areas in Europe with 300 days per year Sun. The average temperature in winter is around 16ºC. In the spring and autumn, the average temperature is around 22ºC and in summer the average temperature is around 33ºC. The low humidity and a cooling breeze from the sea off the south west, despite the temperature still feels comfortable. The inlands of Spain are a lot warmer in the absence of a cooling breeze from the sea. July and August are the warmest. Overwintering, entertainment and excursions:The Costa Blanca is very popular in winter. The most famous resorts for the winter on the Costa Blanca, Benidorm and Torrevieja. In summer, the city's are alive 24 hours a day. In the winter months it is quieter but there is still plenty to do. The Costa Blanca is also suitable for real lovers of culture but only those who are willing to rent a car and go inland. Moreover, in the hinterland are amusement parks and water parks to find where the children can have fun. A jeep safari through the hinterland, an organized tour through the palm forest of Elche or visit one of the spectacular nightclubs in Elche is worth. You can also visit the Priests Garden in Elche with a variety of plants, shrubs, cacti and the famous eight stammige Imperial Palm. You can visit the 17th century St. Mary's Church, located in the old town, where every year the Passion Play: "The Mystery of Elche" is performed. The beautiful historic Santa Barbara Castle in Alicante, which is originally an Arab fortress was, is definitely worth visiting. The castle is on the Benacantilheuvel which offers wonderful views over the city. On the Costa Blanca you will find many restaurants. Ranging from business to tourism rather typical Spanish restaurants and tapas bars. In the tourist centers, the fast food level is quite high and you will find Italian, Dutch and Chinese restaurants.
Unfortunately groups of youngsters (average age below or equal to 25) are not allowed in this holiday residence.
Unfortunately pets are not allowed in this villa
BOOK THIS VILLA ›

General
Around the house
Kitchen
Entertainment